Thank you to all our volunteers that made Earth Day 2019 such a a success! Over 50 volunteers from Roosevelt High School, Schnitzer Steel, and Stumptown Disc Golf, along with the Friends of Pier Park regulars, all pitched in to help improve Pier Park.

Thank You To Our Sponsors

The Pier Park Pick-Up is a part of Oregon’s annual SOLVE-IT event where hundreds of volunteers participate in events across the State, cleaning up dozens of sites: removing graffiti, invasive plants, and garbage.

This year we are thanking New Seasons and Waterlink Web, who donated healthy treats and donuts, and Starbucks for donating coffee and tea.

Enjoy the attached gallery of pictures from the event.

This year Friends of Pier Park is participating in No Ivy Day on October 27th, hosted by Portland Parks & Recreation. The legacy of invasive English ivy removal in Portland is celebrating their 15th year!

Join Portland Parks & Recreation and Friends of Pier Park in removing invasive non-native species as well as beautification projects around the park and the disc golf course. This event is family friendly, but children must be accompanied by an adult. Please dress for the weather, wear sturdy closed-toed shoes, and bring a water bottle. Instructions, tools, gloves, water, coffee/tea and snacks provided.

To volunteer, please register using the link provided below.

April 23rd was the perfect day for the annual Pier Park Pick-Up. Volunteers from the disc golf community, New Seasons, TriMet, Community Inspired Professionals, and SOLVE came out. In all, 26 adults and six youth participated, clearing a 1/4 acres of blackberries and ivy and removing 15 bags of trash.

Along with the invasive plant and litter removal work, volunteers built a trail for disc golfers between holes 7 and 8 and stairs from an apartment complex to make access to Pier Park easier. For volunteers who wanted to paint there was an additional project – 40 picnic tables were painted and refurbished just in time for warm weather parties and reunions.

The most interesting pieces of litter found were two canisters of paintballs!

We will have delicious donuts from Tulip Pastry Shop, coffee from Starbucks, and plenty of smiles!

Please enjoy these pictures from the 2015 Pier Park Pick-Up!

When we first imagined the Pier Park Pick-Up we knew it would take more than our ragtag board of volunteers to tackle the invasive ivy that covered the hillside along one sheltered valley and was established at the north end of the park as well. We knew we needed help.

The encroaching ivy was a threat to the native understory of ferns, wood violets and trilliums, a threat that could eventually rise to choke the Douglas firs that dominate the Park. One member suggested we call SOLVE to get help. SOLVE staff suggested we schedule our event to coincide with the SOLVE IT Earth Day event sponsored by Portland General Electric.

It was a brilliant suggestion. Over the past six years that we have pulled ivy, blackberries, holly and even Japanese knotweed, it has always been with the help of volunteers from companies across Portland. One year it was Boeing who showed up with 50 volunteers including spouses and children. This year it was a law firm, Perkins Coie, who arrived early and prepared with gloves and tools.

Along with our own volunteers and the support of Portland Parks staff I am proud to say that we have beaten back the ivy and the blackberries are at bay. The knotweed is nowhere to be seen and the holly starts that came up over the past year are removed. In fact, even the amount of litter picked up seems to decline each year.

This is the reward of consistency. In North Portland, in a neighborhood park that features a Sequoia grove and a forest of Douglas Fir, the ivy that is taking over so many of our public forests is virtually gone. Thank you SOLVE. Thank you to the hundreds of volunteers who have come out over the years to Pier Park for the annual SOLVE IT event. You have made a difference! 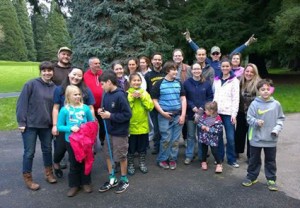 Portland Parks and Recreation is hosting this meeting on Wednesday, April 24th, 6:30 – 8:00 pm at the St. Johns Community Center.

This is your chance to understand how construction of the pedestrian/bike bridge will impact access to and use of both Chimney and Pier Parks from April 2013 to November 2013.

Construction impacts may include:

To review our meeting minutes, please use this link: Minutes

Friends of Pier Park is a 501(c)(3) nonprofit that works to enhance the beauty, safety, and community enjoyment of Pier Park in North Portland.

Donations at any level are welcome.